Samyang AF 12mm F2 for Sony Mirrorless Camera
Review: 5 - "A masterpiece of literature" by John Doe, written on May 4, 2006
I really enjoyed this book. It captures the essential challenge people face as they try make sense of their lives and grow to adulthood.
-18% What's in the Box?

I was initially reluctant to order direct from Futuromic store as I'm more confident with buying through Shopee or Lazada these days. It ended up being a relatively painless process and my item was also packed very securely so kudos to the Futuromic team.

The best surprise was that I received it prior to Hari Raya as I expected it to take a lot longer to arrive, being a pre-order item and all.

The lens itself is a nice upgrade over its Manual brother (which I also once had), with much better coatings (much better flare control), AF (makes it actually usable for video and non-astro use now) and weather sealing. The included case is pretty nice as well, as is the solid pre-order freebies.

Downsides are that it's no longer metal-bodied (it's largely plastic now), the hood isn't reversible (makes mounting step-ups for oversized filters a chore) and the focus-by-wire does not have a hard stop at infinity (expected but still disappointing, especially for astro).

But for such a tiny lens (and such a wide FOV), it's still a must get if 12mm is something you personally find appealling - especially considering that it's only other real rival is the Zeiss Touit. 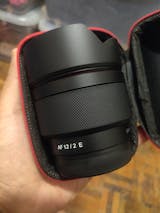